Online casinos and the Academy Awards Every year, the Hollywood elite take to the red carpet at the Academy Awards – more frequently known as the Oscars – to celebrate the year in cinema and award the industry’s finest achievements. From actors and writers to directors and editors, not to mention the technical wizards that bring new worlds to life, these awards are intended to honour outstanding work and the biggest and brightest talents that the City of Angels has to offer. Viewers around the world tune in in droves to witness the glamorous gowns, the emotional speeches and the edge-of-your-seat upsets that have made the Oscars a TV staple for over ninety years. Broadcast from LA to London, the Netherlands to Australia and everywhere in between, the Academy Awards are a global event that brings the whole world together to celebrate the art of movie magic!

Online casino and betting sites have also taken a keen interest in this annual event, offering a variety of odds that range from outright winners to special bets, such as who will appear last in the In Memoriam section. However, while enthusiasts and movie buffs may feel confident predicting these often unpredictable awards, newcomers may feel daunted. Fear not! Read on to discover some hot tips and trends for this year’s Oscars and to discover who’s leading the pack in the race for the gold!

The 93rd Academy Awards will take place on 25 April 2021, around two months later than their usual date. The reason for this shift is tied to the extraordinary circumstances of the 2020 movie calendar, with movie closures and halted productions limiting the number of available contenders for this year’s ceremony. This limited pool of contenders may be a boon to those betting at online casinos, with reduced competition potentially leading to a more predictable year ahead. That said, there is still plenty of time for frontrunners to stumble and dark horses to surge – as they do every year – so the race remains open and competitive.

The eligibility requirements for the 2021 Oscars have also changed to align with these new circumstances. Traditionally, movies must be screened by 25 December to compete, but this year has seen the eligibility period extended to February, in order to allow late-finishing movies to compete and bolster the number of competing films. The rules regarding a traditional release have also been relaxed. In a regular year, movies are required to screen in cinemas in both New York and Los Angeles before the deadline; however, this year, in light of cinema closures and restrictions, streaming services and direct-to-video releases will be allowed to compete if they were originally intended for a traditional release.

These changes have had a big impact on the state of the race, with many pundits predicting streaming giants like Netflix to dominate the nominations. The lack of traditional studio fare also means that out-of-the-box contenders may find themselves in consideration, making this year an exceptionally exciting one for followers of the race. Online casinos and betting sites are already offering odds on key categories, so let’s take a look at the current state of some of the key races. 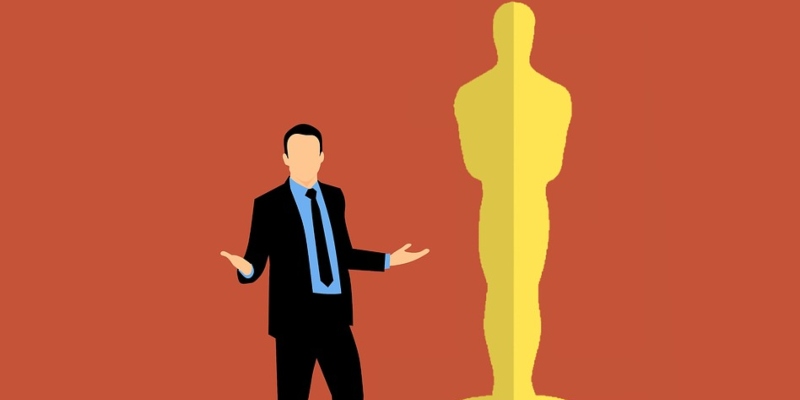 What makes a Best Picture winner?

Of course, the main race is arguably the one that pulls in the most interest and the Best Picture race is certainly the most hotly contested every year. It should also be noted that last year’s winner, Parasite, broke barriers by becoming the first ever foreign-language Best Picture winner, so this category seems to be increasingly unpredictable with each passing year. That said, many early frontrunners have already screened at film festivals around the world, which gives those who want to bet at a casino online some idea of what the race currently looks like.

Nomadland seems to be the current favourite, thanks to the rave reviews it received at the Venice Film Festival – where it won the Golden Lion, the equivalent to the Best Picture award – and the warm reception from audiences. This film won the Audience Award at the Toronto International Film Festival, which has been a strong indicator for the Best Picture race in recent years. Furthermore, it is the first movie to win both of these awards, suggesting that both critics and audiences alike have fallen under its spell. The movie tells the story of Fern, a woman who loses her job during the Great Recession and embarks on a nomadic journey across America as a temporary worker. Many have noted the timeliness of this particular film, which shines a light on economic disparity and poverty in the United States. Those placing a bet at an online casino will be hoping that Nomadland follows in the footsteps of other socially conscious Best Picture winners, such as Green Book and Moonlight, both of which recently took home the trophy.

If Nomadland is hoping that its timeliness will provide a path to the stage on Oscar night, Mank will be hoping to follow the precedent set by recent victors like Argo and Birdman. This biopic of Herman J. Mankiewicz, the screenwriter responsible for Citizen Kane, features recent Oscar winner Gary Oldman and is directed by perennial favourite David Fincher. This impressive pedigree, coupled with the continued success of movies about Hollywood at the Academy Awards, suggest that this movie, which has been produced by Netflix, may be one to watch for betters.

If voters want to eschew streaming services and independent films when it comes to the Best Picture winner, News of the World may be the beneficiary. Some of the best online casino sites have this film just inside the top five, but it remains one of the few traditional cinema releases that is planned for release during the eligibility window. Set just after the Civil War, the movie stars Tom Hanks as a man responsible for delivering mail across the country. After finding a young girl who needs to be returned to her family, he takes her under his wing and sets out on a perilous quest to bring her home. Hoping to secure the blockbuster vote, this movie could be a dark horse in the race for the top prize!

Could historic wins be on the cards?

Unprecedented times call for unprecedented outcomes and many of the best online casino websites are offering good odds for some historic wins on Oscar night. Chloé Zhao, the director of Nomadland, is hoping to become only the second woman in history to take home the Best Director Prize, and the first woman of colour. Similarly, Viola Davis, who stars in the titular role in the adaptation of August Wilson’s play Ma Rainey’s Black Bottom, would be only the second woman of colour to take home the prize for Best Actress in a Leading Role. Davis previously won an Oscar for Best Actress in a Supporting Role for her turn in another Wilson adaptation, Fences.

Odds suggest that Zhao will be facing off against David Fincher, who many regard as overdue for a win, while Davis will be competing with a line-up that includes many other former winners, including Kate Winslet in the period romance Ammonite and Frances McDormand for Nomadland. Meanwhile, both Glenn Close and Amy Adams, who have been nominated for seven and six Oscars respectively, will be hoping to finally take home the gold for their turns in Hillbilly Elegy. This family drama about a young boy growing up in a rural part of the country is said to be timely and politically relevant and both Close and Adams are tipped for nominations by many bookmakers. Close will be competing in the supporting category as the protagonist’s protective grandmother, while Adams is predicted for a leading campaign as his drug-addicted mother.

The Best Actor in a Leading Role prize currently looks to be one of the most competitive categories, so check your preferred casino online for up-to-the-minute odds. Anthony Hopkins, who previously netted the Best Actor prize for his now-iconic turn in Silence of the Lambs, is said to give a career-best performance in The Father, as a man suffering from the early stages of a neurological disorder. Based on an award-winning play, this role has won major accolades for all of its previous leads and Hopkins’ stature as an acting legend will certainly make him a frontrunner in this year’s race. His competition is Chadwick Boseman, who co-stars with Viola Davis in Ma Rainey’s Black Bottom. The Black Panther star’s performance is said to be his finest ever and, due to his unfortunate passing earlier this year, there will certainly be sentiment among voters to reward an acclaimed character actor and movie star who blazed trails and inspired many.

The Academy Awards are always fluid, with critics’ accolades and precursor awards like the Golden Globes and Bafta helping to shape the race over the coming months. If you’re betting on the Oscars, make sure to stay abreast of the rising and falling odds at your favourite online casino.